Home > Sustainability > American Recycling is at a Critical Juncture

How COVID-19 Has Forced American Recycling to a Critical Juncture

In March, the world pressed pause. In the United States, lockdowns rolled out coast-to-coast to keep Americans at home, safe from the COVID-19 pandemic. As consumers began panic-buying disinfecting wipes, toilet paper and other household necessities, grocery store shelves were emptied and the national psyche on plastic and packaging waste shifted.

Plastic bags returned to stores in areas that had previously restricted them. Reusable containers like coffee mugs were no longer welcome at cafes. Single-use masks, gloves and protective items became vital to the fight against the coronavirus.

It was a stark reversal from the months before, when the fight against plastic and packaging waste was gaining momentum.

But is this reversal a response to the moment or a larger retreat? For the future of American recycling, the answer to that question could make all the difference.

Safety and hygiene take priority over the environment.

Though an overwhelming majority of Americans said they were concerned about the environment (82%), that figure is down from 90 percent in 2019.

Similarly, 80 percent said they are concerned about single-use plastics, compared to 87 percent last year. It is a small retreat, but a retreat nonetheless — one that could slow environmental progress.

The clearest evidence of a shift in mindset is the nearly seven-in-ten (69%) Americans who say they are more concerned about safety and hygiene than environmental impact.

The ramifications of that mindset amplify the importance of recycling at this moment.

Even as the United States contends with many challenges, recycling — while not a silver bullet solution to waste challenges — is foundational to the environment’s future.

Has the pandemic changed how Americans feel about single-use plastic?

The pandemic is only raising the stakes. Before COVID-19, a frequent societal question was, “Should single-use plastics be eliminated?” Now, the world is using more plastic as a result of the virus — plastic that the majority of Americans would rather see recycled than banned.

Sixty-two percent of respondents agreed that improving the recycling system so it can efficiently process plastic is the best way to deal with plastic waste.

Another 20 percent were unsure and 17 percent said the United States should ban single-use plastic.

Nearly nine-in-ten (89%) Americans believe that a pandemic like COVID-19 could happen again, which punctuates the need for a recycling system capable of handling another spike in plastic and packaging waste.

Regardless of future pandemics, the United States may never return to “normal” in many ways. Even after a vaccine is made available, the behavioral changes adopted during the pandemic may linger, similar to how Americans who lived through World War II saved scraps or rationed food long after the fighting ended. Fears over safety and hygiene that have led to an increased use of single-use plastic and packaging may be slower to depart Americans’ psyche.

The United States required a functioning recycling system before COVID-19 — supporting the increased volume of waste resulting from the pandemic exacerbates what was already an urgent need.

During the pandemic, half (50%) of Americans said recycling becomes even more important for handling the increase in single-use plastic and packaging; 42 percent say it is equally as important as before.

The urgency of solving COVID-19, clearly the most pressing issue, has eclipsed other priorities, including the plastic and packaging waste crisis.

Today’s national backdrop has a lot of immediate needs. Finding a vaccine for COVID-19, reasonably so, is the only national priority where a majority (52%) said fixing America’s recycling system was a less critical priority.

But, as the results show, even against the many pressing issues the nation faces, recycling is seen as equally if not more critical by respondents.

Today’s recycling system doesn’t function effectively, making the increased volume of material a more significant challenge. The U.S. recycling system is currently made up of nearly 10,000 different programs, all with their own rules about what can and cannot be recycled. The majority (75%) of Americans agree that allowing recycling systems to set different standards creates confusion.

With thousands of counties and municipalities across the country setting their own recycling rules, many Americans are unaware that frequently used items may or may not be recyclable. For example, a pizza box in Arlington County, VA can be recycled, but in bordering Fairfax County, VA, it can’t. When asked about a list of frequently unrecyclable items, 46 percent of Americans believe pizza boxes can be recycled curbside, followed by 43 percent who think the same for Solo cups and 40 percent for plastic bags.

Another 39 percent of consumers believe to-go coffee cups, which contain an unrecyclable polyethylene film on the inside, can be recycled curbside, along with 36 percent who say plastic straws and a smaller 27 percent who say Styrofoam can go in the blue bin.The challenge is, no matter what respondents answered about the recyclability of specific items, they could be right — or they could be wrong.

The lack of standardization breeds confusion, resulting in contamination when trash is unintentionally mixed in with recyclables. Contamination leads to recyclable material ending up as landfilled waste. Waste breaks the packaging loop.

All stakeholders have to be in, or recycling will be out.

What’s the Role of Recycling Stakeholders?

Here’s how survey respondents ranked who is the most responsible when it comes to addressing major problems with the waste crisis.

The limited faith Americans have in the current system does not translate to apathy, however.

When asked about who needs to be part of solving the plastic and packaging problem, respondents placed themselves at the top of the list.

One of the greatest challenges, however, is that consumers can hold themselves accountable but the confusing recycling system of today sets them up to fail.

Though retailers, state and local government, the federal government and NGOs fall further down the list, there is still a significant percentage of Americans who feel they too must be part of the solution.

Every stakeholders’ role in that shared responsibility, however, is not the same. As survey respondents made clear, the consumers’ role in putting recyclable material in the right place is critical. But the total lifecycle of packaging offers distinct responsibilities for each stakeholder.

From the start — designing a more sustainable, environmentally friendly package — to the finish — ensuring that package is recycled into something new — citizens, governments and private industries all need to be at the table if the United States is to close the loop.

One of the biggest parts of the packaging loop is ensuring that material is reliably collected and processed. Unsurprisingly, the majority (70%) of Americans feel that the waste management and recycling industry should be principally responsible for running recycling systems — the pickup, handling and processing of material.

State and local governments were a distant second, with 46 percent saying they should have responsibility. It is a significant percentage at nearly half of respondents, explained by the fact that in many areas of the country recycling programs are or appear to be run by state or local governments. Case in point, only 29 percent felt the federal government should have a stake in running recycling systems. From there, the numbers drop markedly, a signal that most Americans do not feel that running a recycling system is the job of groups like NGOs, retailers, CPG manufacturers and others.

Then there is the question of how a lasting recycling system should be financed. There is little question that designing and building a system to accommodate modern consumers will require funding. In fact, Consumer Brands Association’s Achieving America’s Recycling Future offers a host of financing options that could be considered when a viable solution is available.

The mindset on who pays for sustainable recycling shows a consumer expectation that several stakeholders will have to give to the effort. Respondents placed manufacturers of plastic and packaging material (49%), state or local government (44%), federal government (43%), CPG manufacturers (39%) and the waste management and recycling industry (38%) in league with one another. Retailers (26%), consumers themselves (25%) and NGOs (13%) were at the bottom of the list.

Before any funding decisions can be made, what that funding will support must first be determined.

The data in this report shows that while COVID-19 has created additional challenges for designing a lasting recycling system, it also shows that American consumers have a clear desire to move forward with creating it.

The pandemic has fundamentally changed America. It has forced us to a critical juncture for our environmental future. Will we use this crisis as an opportunity to rethink and rebuild an outdated recycling system or will we allow its continued deterioration?

Americans have made it clear that they value recycling, and they expect engagement from all stakeholders — themselves included — to create a system that is scalable, economically viable, consumer-friendly and lasting.

COVID-19 has upended our world. But amid that tremendous change, we are still writing the story of our environmental future. The question is, what do we want it to say?

The primary survey consisted of a total of 1,016 surveys, completed among a nationally representative sample of Americans, age 18 and older. The margin of error for the total sample is +/- 3.4 percentage points at a 95% confidence level. That survey was conducted between June 19 and June 27, 2020.

A secondary survey consisted of a total of 1,018 surveys, completed among a nationally representative sample of Americans, age 18 and older. The margin of error for the total sample is +/-3.3 percentage points at a 95% confidence level. The second survey was conducted between August 7 and August 9, 2020. 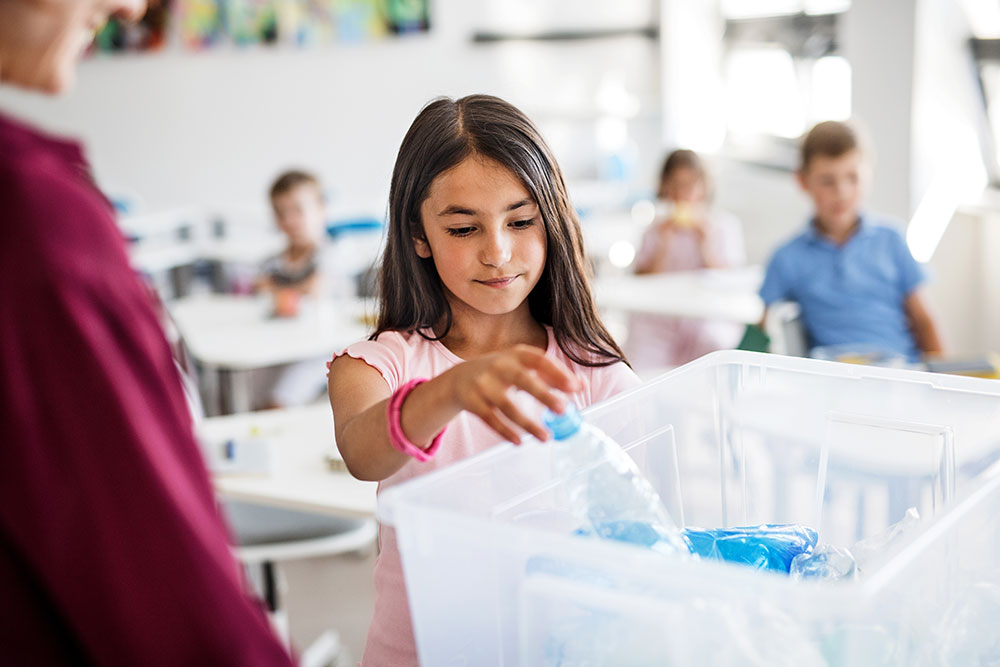 Creating a sustainable future, through increasing recyclability and reimagining the recycling system.

The CPG industry plays a crucial role in creating a more sustainable future through packaging innovation and increasing recyclability. A sustainable future demands that every stakeholder be part of a holistic and honest assessment of our recycling system if we want to create meaningful and lasting change.