If pushing your cart up and down grocery aisles has resulted in sticker shock recently, you’re not alone. I’ve done a few doubletakes myself shopping for my family. But I have also spent the last year-plus reviewing economic data about what’s forcing prices up. That doesn’t mean I like it any more than the next consumer, but I have the benefit of at least understanding what’s driving it — and what’s not.

The Forces Behind Inflation

Inflation is not an overnight phenomenon, and it was not caused by any single action. While uncontrollable factors like Russia’s invasion of Ukraine and weather events like India’s heat wave have intensified cost pressures — particularly for wheat, sunflower oil and energy — wholesale prices have been climbing since January 2021. Inflation has been fueled by a host of factors:

While the Fed raising interest rates should have a cooling effect on the economy, food and energy are staples and have different demand patterns than categories considered part of core inflation. In short, higher interest rates may chill a red-hot housing market, but they won’t slow demand for CPG products. In fact, demand in May was 6.3% above the year before, and the tenth straight month where demand exceeded March 2020’s panic-buying that sent sales soaring.

Keeping up production to meet consumer demand will mean continued company demand for ingredients, materials and energy. Wholesale costs have been rising steadily for the CPG industry for the last year, signaling that there could be consumer pricing challenges ahead — challenges that are now here. Input costs for the industry are up 35% compared to the pre-pandemic level and continue to trend higher than wholesale prices for the overall economy in monthly reports.

On a monthly basis, wholesale prices have continued to set records, most recently rising 8.7% in August’s PPI report over last year. For food manufacturing, specifically, costs rose even more, climbing 12.2% higher than last August. Key commodities to the CPG industry continue to be shockingly high: eggs spiked 104.7%, despite a 25% decline between July and August. In July, diesel was up 71%; wheat jumped 22%; and edible oils were up 14%.

These numbers are made more remarkable when you consider the impact they have. Approximately 70% of the industry’s costs come from inputs — ingredients, materials and energy needed to make products. After inputs, the second-largest investment for CPG companies is its employees’ payroll and benefits. CPG is a human powered industry, dependent on its robust employee base of more than two million Americans that delivers for consumers every day.

As the pandemic ramped up, CPG employees embraced their role as essential workers, and companies invested quickly and significantly to ensure their health and safety at work. Hormel spent $20 million by June 2020 on Covid-19 mitigation efforts and introduced measures like on-site testing at some high-risk plants. Campbell’s said the company’s COVID-related costs totaled $50 million during the fourth quarter of 2020.

Pay is also on the rise for the CPG workforce. Manufacturing workers have seen a 5.9% pay raise over last year, above the national average of 5.1%. Companies are also investing in efforts to recruit and retain employees by bettering benefits offerings. From expanded childcare options to being able to choose hours on-demand (without sacrificing full-time benefits), companies are getting creative in addition to offering higher pay.

Recruitment and retention are critical priorities for CPG companies now. In June, the industry added 6,607 jobs, forward momentum to be sure, but a far cry from its 113,000 job openings. The effects of the labor crisis are rippling across the supply chain, from packaging suppliers struggling to find workers to retailers in need of employees to stock shelves. This need is going unmet even with wage increases for manufacturing facility employees that outpace the national average. The workforce has grown 4.3% above its pre-pandemic level, an outlier compared to the rest of the economy, it must grow more to meet ongoing consumer demand.

There’s isn’t a singular solution to inflation, and it’s critical for the government to seek solutions that solve for its root causes. Consumer Brands is dedicated to working with legislators to seek realistic resolutions with a specific emphasis on those that are both within our control and require federal leadership.

In May, Consumer Brands and the National Association of Manufacturers led 134 organizations in urging the Senate to include critical House-passed supply chain provisions in the final version of the USICA-COMPETES bill. Provisions in the bill include the creation of a Manufacturing Security and Resilience Program in support of the supply chain as well as $45 billion in grants in support of supply chains and manufacturing. The passing of such provisions would create greater visibility in the supply chain, allowing us to spot issues before they become crises and give consumers greater confidence that the products they depend on will be reliably on the shelf.

Those supply chain provisions will take time to make a difference (though they will make a significant difference when they take effect). But there are near-term decisions that will help alleviate pain points today. With commodities running short, particularly those affected by the war in Ukraine and export bans, the ability for CPG manufacturers to make necessary substitutions has never been greater. Keeping up production to get consumers what they need requires labeling flexibility so essential products being in compliance and in stock aren’t at odds.

The economic consequences of the last two years are here in the form of inflation. There’s no question that these are difficult times for American families. The question that remains is what our political leaders choose to do about them. 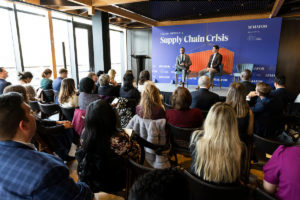